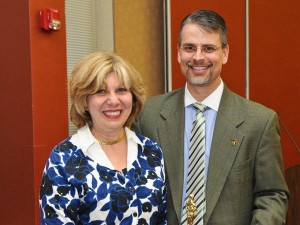 The first time I met Diane was in July of 1999, when I began my duties as Dean of Humanities and Social Sciences. At that time, Diane worked from the Lawrence County Vo-Tech. Her office was in a long, narrow closet. Honestly – a closet. When I eventually found the location, she was impeccably dressed (as always) and enthusiastically greeted me.

From that moment on, I treasured Diane.

We would talk about family, New Castle, traveling, her love of wine and the loves of our lives – her husband, Ricky, and my wife, Tammy. She always asked to see pictures of our daughters and was genuinely interested in hearing about Paige and Meredith.

I would ask her what Ricky was doing for Valentine’s Day to steal some ideas for Tammy. Their marriage and love for one another always has and always will be the standard for our relationship.

Bill O’Brien, Vice President for Continuing Education and Off-Campus Sites, and I were thrilled to hand over the keys to a brand new BC3 @ Lawrence Crossing in 2008. “Diane was finally getting out of the closet,” I said in our grand opening of the location at the time.

Someone once told me the last thing a President wants to hear about are problems. In my time at BC3 as a President – or even Dean or Vice President for Academic Affairs, for that matter – never once did a single problem from Lawrence Crossing reach my desk. Why? That’s simple: Diane DeCarbo.

She was tenacious; never missed a deadline; always followed-up on assignments; and never griped. I used to chuckle when I heard stories about how she would enforce our tobacco-free policy. Didn’t matter if the student was a 6-foot-4, 20-year-old young man, Diane had no problem carrying out the College’s rules.

Citizens of Lawrence County, specifically New Castle, have one person to thank for higher education in its backyard: Diane DeCarbo.

Ricky called last week to tell me Diane had passed. He asked me to serve as a pallbearer and give the eulogy. I was blown away and honored. Of course, I accepted.

The very next evening, I came down with the flu. I had to reluctantly tell Ricky I couldn’t serve in either role a couple of days later. Today is the first day I’ve been out of bed. This blog entry is the very first thing I’ve written in that time. And while it isn’t the eulogy I so badly wanted to give, it is my tribute to Diane.

Rest in peace, my friend. Your legacy will live on.

This entry was posted on Wednesday, March 9th, 2016 at 8:27 pm and is filed under BC3 President's Blog. You can follow any responses to this entry through the RSS 2.0 feed. You can leave a response, or trackback from your own site.

This site uses Akismet to reduce spam. Learn how your comment data is processed.